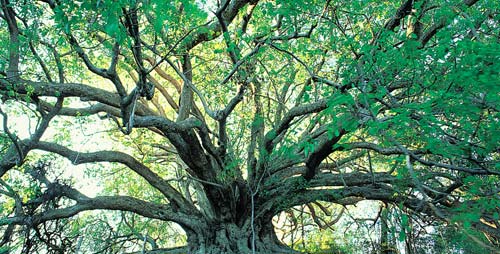 With its aerial roots descending from its bushy crown to the ground, becoming trunks, and its heart-shaped leaves, the banyan invites to meditation. In Asia, they are found everywhere: in the towns, in the middle of a road, in front of a building or in the middle of a parking lot, and are tended to by devotees who come to place some offerings or prayers.

Indeed, it is said that Buddha attained enlightenment under the shadow of a banyan tree. And the Bhagavad-Gita made it the tree of supreme knowledge.

This tree has a particular energy, the banyan trees are very often found near the temples, and can live up to 1500 years. It has the power to calm the mind, but also to take the mind very high to heaven.

In South America it is called “the tree that walks” because it seems to have enormous legs that can be compared to elephant’s that leave the “main trunk”.

The most famous and most sacred is in the holy city of Bodh-Gaya, in northeastern India, where the Buddha would have attained enlightenment.

The Great Banian of Howrah, near Calcutta, India. Its diameter is over 130 meters.

Another famous Banyan is the Dodda Alada Mara in Bangalore.

The banyan is part of many Ayurvedic remedies. One uses its sap, its leaves, or its bark.