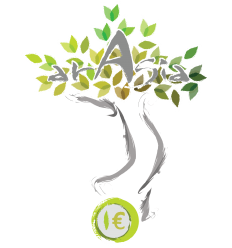 Arasia offers you, in collaboration with Planète Urgence, to plant a tree, or several, thanks to its reforestation actions in Peru (Amazonia), and in Indonesia. Arasia and its clients have already planted 2,080 trees since 2010. The projects we select make local populations aware of the issue of trees and forests, and the population becomes an actor in its own development, in harmony with nature. 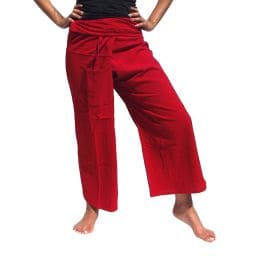 Thai pants are essential garments in the world of wellness, yoga classes, martial arts, massage parlors, spas ... It is one size fits all and unisex. Casual, original and comfortable. 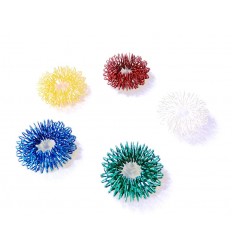 Finger massage rings are also called acupuncture rings or sujok rings. Popular among Chinese, the inventors of acupuncture, their daily use brings well-being by the relaxation of meridians. 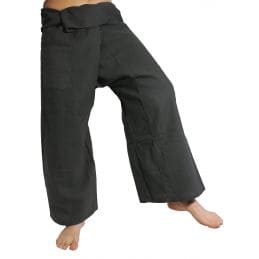 The Thai XL pants are 20 cm longer than the standard model and are suitable for very tall people (from 1.75 m). Its size is adjustable, and adapts to your morphology by a set of folds.

The mala or japa mala can be worn, depending on the model, as a necklace or bracelet, by women, but also by men.

It is a magnificent accessory to enhance a style but also to bring a spiritual side to our lives, which have often become too material.

The Sanskrit word "mala" means "garland" or "necklace". It is originally the Hindu rosary, generally composed of 108 beads that can be made of wood, stones or seeds...

The number 108 is sacred in the mythologies of India. Its symbolism is very powerful.

The 108 mala beads are used to count the number of breaths or mantras recited, during meditations or prayers.

When you repeat a mantra 108 times, it finds its way to you, and its magic permeates your heart cells... later in the day, you find yourself humming the mantra instead of turning your thoughts over in your mind.

The vibration created by the mantra in your body is a powerful healing tool (like Tibetan singing bowls), but it is also a powerful antidepressant.

This is called the yoga of the voice. It is an integral part of the practice of yoga, the ancient art of self-knowledge. It stimulates the Vishuddha throat chakra. Vocal yoga should be avoided if you have a sore throat (wait until symptoms subside before practicing).

Sort by:
Best sellers Relevance Name, A to Z Name, Z to A Price, low to high Price, high to low
There are 15 products.
 
Active filters 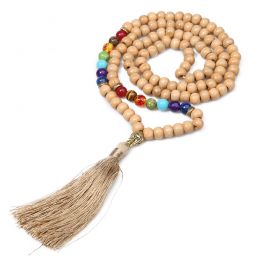 This pretty mala necklace is made of wood, with 2 rows of 7 beads in the colors of the 7 chakras, a golden Buddha head bead and beige pompom. Total lenght about 45 cm. 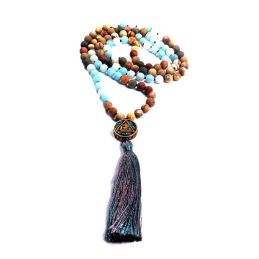 This beautiful mala necklace is made with 108 amazonite and landscape jasper beads, a Tibetan style pendant with inlaid turquoise and rubies, and the engraved aum sign. There is also a purple and sky blue ponpon. Amazonite is a stone of tenderness and sincerity. The landscape jasper is a stone of introspection, which helps to move forward in life.

This mala is a long necklace made of wood beads, onyx and tiger's eye with a black tassel. Onyx (black agate) is the artist's stone and the tiger's eye is a protection stone and a good anti-stress. This very stylish mala is suitable for both men and women. Total length about 55cm, pompom length about 9cm. 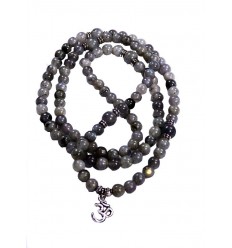 Labradorite is a magic stone used for a very long time by healers. It develops psychic gifts and raises spiritual awareness. It is a stone of harmony and protection. It stimulates creativity and imagination. 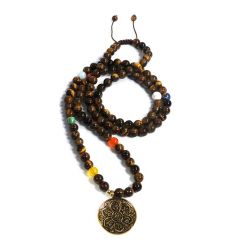 This tiger eye mala is composed of 108 pearls (diameter 8 mm) : 101 pearls of tiger eye + 1 pearl for each main chakra: carnelian, corail, howlite, sodalite, moonstone, turkénite, yellow jade. The pendant represents on one side a lotus flower with the representations of the 7 main chakras, and on the other side a svatiska. 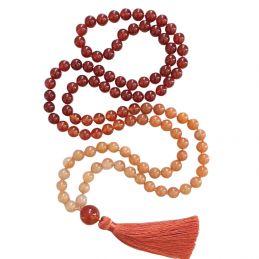 This mala consists of 108 + 1 pearls of 8 mm diameter in carnelian. Carnelian is the stone of fertility and creativity. Help with concentration and a clear vision of our projects. Calms and balances the mind. Give courage and energy. 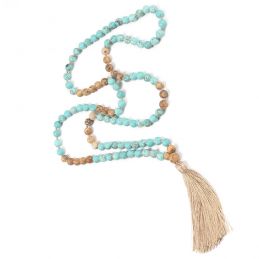 This magnificent mala in turkenite (tinted howlite) and landscape jasper connects us to both the earth (anchoring) and the sky (meditation). 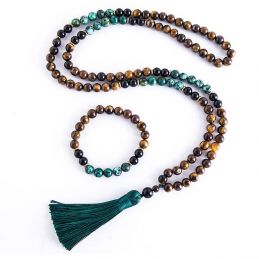 This mala and bracelet set is made of tiger eye, onyx and African turquoise beads. Its main properties are anchoring and protection. You will feel safe and confident. Which is the basis for getting ahead in life. 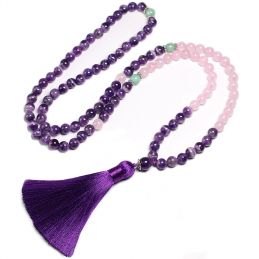 This mala is composed of amethyst, rose quartz and amazonite beads, diameter of the beads 8 mm. There is also a purple pompom. Brings peace and serenity. Purple is the color of spirituality and healing. 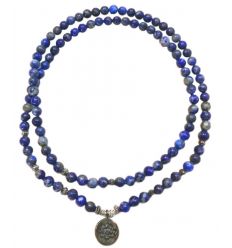 This mala includes 108 lapis lazuli beads and a lotus flower silvered charm. Lapis lazuli is a spiritual stone that strengthens intuition and helps you remember your dreams. It is a stone of protection against negative energies. It is connected to the 6th chakra. 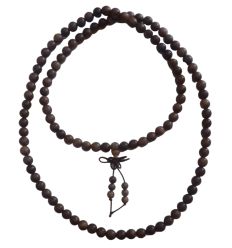 Sandalwood is a sacred tree found in India and Tibet. Its bark has many virtues. Its wood is soft and naturally fragrant, and is traditionally used in jewelry making. 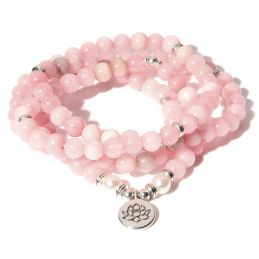 This very pretty mala is composed of rose quartz beads, some labradorite beads, and a lotus flower pendant. It will bring you emotional peace, and the sweetness of your feelings. It intensifies the feelings of love and friendship. 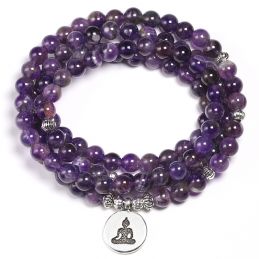 Amethyst, a stone of a high level of spirituality, will bring you peace and emotional healing. She purifies our thoughts and connects us with the higher planes. Keywords: wisdom, humility, balance. The Buddha pendant is a symbol of spiritual awakening. Key word: compassion. 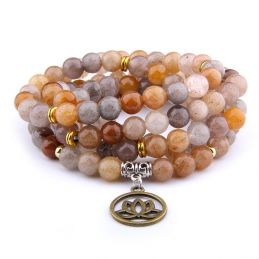 This very pretty mala pendant in yellow, orange and gray agate and lotus includes 108 beads. It can also be worn around the neck as a necklace or wrapped around the wrist as a bracelet. 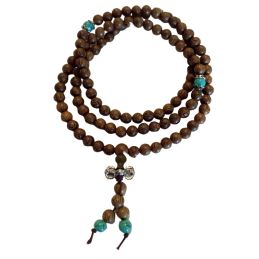 This pretty wooden mala bracelet can also be worn as a necklace. Made up of sandalwood beads and turkenite (imitation turquoise tinted howlite).