The death of King of Thailand plunged the country into uncertainty.

The king of Thailand RAMA IX aka Bhumibol Adulyadej, was born on December 5, 1927 and died on Thursday, October 13, 2016. He ruled over Thailand for 70 years. His dynasty, the Rama dynasty, succeeded the dynasty of the kings of Ayutthaya and Bangkok was established as the capital of the kingdom in 1782. Bhumibol is revered like a demigod and his portrait is omnipresent in all homes. 90% of the population had only him as a ruler, he held a central role in the unification of the country.

The designated successor is his only son Maha Vajiralongkorn. He is not very popular because of his erratic personality and lack of commitment. Most Thai people would prefer to see his sister,Maha Chakri Sirindhorn, on the throne

The troubled political context of the country:

After a strong economic growth in the 85’s -95’s, Thailand was among the four dragons of South East Asia, nowadays the country is experiencing a troubled politicalclimate.

The relations between the army, the royalist “yellow shirts” and the pro-democratic “red shirts” are often violent. The country is plagued by coups, internet censorship and the imprisonment of journalists and opponents.

Any unfavorable opinion towards the king or his family is punished as a crime of lese majesty according to the Thai constitution. Its authority and legitimacy are truly immutable. The King is the symbolic father of all Thai people.

By tradition, Father’s Day is set on the king’s birthday (therefore on December 5 since 1946) and it is the same for Mother’s Day.

Following the death of the king, the entire country was grieving. A mourning period of one year was declared after which the new sovereign will be crowned.

I convey my condolences to the Thai people for this difficult moment in their history, which I am sure they will be able to face with the wisdom that characterizes them.

Brahma , the creator , was born in a lotus , a symbol of the origin of the event.

The lotus ( Padma in Sanskrit) is the sacred flower of Buddhism and Hinduism.

Out of the mud , it rises towards the light and represents the elevation and spiritual realization .

It serves as a throne to the deities .

symbol of beauty , purity and elegance, it is also the national flower of India .

The Lotus Temple in New Delhi, India, is an architectural curiosity lotus flower shape about to hatch. The temple is to be universal and open to all religions . People don’t necessarily  perform a particular ritual , there often come just meditate in silence and an open their heart.

The lotus symbolizes the heart or the divine office and the chakras, which are also called the lotus, or wheels. The wheel is a stylized lotus , or from the center and returns to the center .

In yoga, the position of the lotus (padmasana) is a symbol of meditation and enlightenment.

“My mind is either my worst enemy or my best friend”

Take control of your mind by meditating to deprogram yourself.

Get rid of negativity in the form of anxiety, discomfiture, greed, hatred, ignorance, fear, or anger by familiarizing yourself with positive states of mind: contentment, patience, kindness and wisdom.

Stay calm and accept the events that you have no control of, and eventually you will be in harmony with the universe.

“Do not want what you already have! ”

Know yourself more through the spiritual development and you can look inside you and know who you really are.

“He who is a master of himself is greater than he who masters the world. ”

More information, and Buda statues for sale on my webshop Arasia. The Buddha of prosperity or the Happy Buddha is not to be confused with Siddhartha Gautama, the historical Buddha 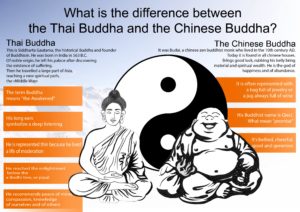